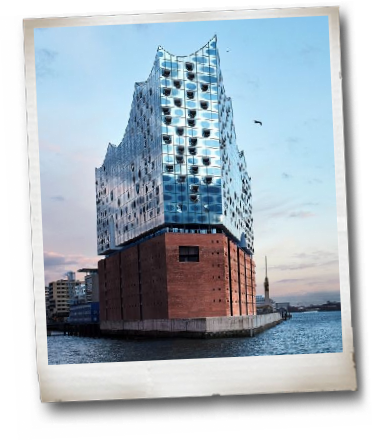 Architecture in Hamburg (with "Elbphilharmonie")

Bricks und concrete, steel and glass – discover the architecture of Hamburg from past to present with the special knowledge of an architect!

The architectural tour is possible as a bus, bicycle or walking tour.
Time allowing we will also be able to visit inside some buildings.
We can also take a look at the city models located in the Hamburg Museum (extra charge.)
The trip will last at least two hours, with a maximum length of four hours.
There will be a half hour break after the first two hours.

Appointment and fee by arrangement (dependent on the number of people and duration of the tour).

The new symbol of Hamburg! Already more than 12 million visitors at the platform “Plaza” and 2,5 million guests at the concerts of our new classic music concert hall. Look at the Elbphilharmonie Yourself!